What should happen to people who commit crime? The consequences affect us all. 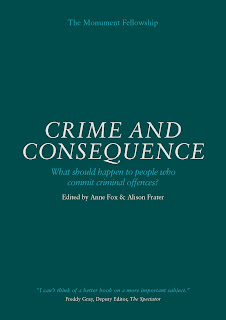 Crime & Consequence - what should happen to people who commit criminal offences? launching today, is the third in a series of books, curated by Clinks and National Criminal Justice Arts Alliance on behalf of The Monument Fellowship. Anne Fox, Clinks Chief Executive Officer blogs about why it was written, what it was like to put together, and why it matters.

I’m not a writer – I’ve never harboured ambitions to write. I have a postcard on my desk that I bought from Koestler Arts – it reads “I never knew I had a story in me”. I don’t – but it turns out that I can call on at least 57 people who do. My job, along with my fellow editor Alison Frater, was to sift through a treasure trove of contributions, selecting the best to produce a book and bring it to life in print: our new book Crime & Consequence.


Our intention, from the outset, was to collate something which would be accessible and relatable to the widest audience we could reach. Why? Because we want and need the widest range of people to engage with the question we posed, “what should happen to people who commit criminal offences?”.

However, the criminal justice system is a public service most people rarely give much thought to. It’s the public service perhaps that we most want to avoid, but we really should think about more. What’s it for? What should it do? What’s its purpose? What does it look like when it works best? What difference should it make to people’s lives?

What we know from the work of the Reframing Crime and Justice project - led by Transform Justice, with Clinks as a partner - is that “in order to effectively engage the public and ignite a more productive conversation about criminal justice reform, communicators need to adopt a narrative strategy that dislodges the role that punishment plays in public thinking about criminal justice".

So, when The Monument Fellowship gathered in October 2018 to decide on our third question, our discussions led us to conclude that it was time to ask the big question: what kind of system should we have to respond to crime, or specifically, what should happen when people commit criminal offences?

This question in many ways is at the heart of the Fellowship itself, formed as The Monument Trust was preparing to close after many years of incredible support to the criminal justice voluntary sector. The Trust has funded and built an impressive number of positive interventions and approaches for better diverting people from the criminal justice system, repairing the harms done and supporting people to leave the system and live better lives. Mark Woodruff of the Trust describes the fellowship eloquently in the book as “the collaboration, mutual inspiration and cumulative effect of seven bodies and approaches vital in our experience to making a decisive difference along the journey of people at risk of offending”.

A rich mix of perspectives

We were delighted to be able to lead the work to source and collate this year’s contributions, mainly because we are able to rely on a broad network of people and organisations who have the expertise, knowledge and experience that qualifies them to have something to say on this subject, which we feel needs to be heard. This network was made available to us through the Fellowship with its broad and extensive reach and through our own members, supporters, followers and partners. Our contributors all have different experiences of the criminal justice system and all speak from a place of knowledge from that experience, be it lived or professional.

The job of finding content was easy – we put the question out as an open call and asked people what subject they’d write on as well as identifying thought leaders through the Fellowship’s contacts and inviting their views. We were quite taken aback by the response – almost 100 pitches in total. So when faced with so much potential content we made a decision – we wouldn’t try and overly edit the book – we wouldn’t try and speak for people or change their pieces, but instead present the different contributions in a format that would allow the reader to see clearly that there is no one answer to the question.

There's such a range of opinions, especially when you get to the heart of exactly what should happen - what interventions, what type of sentence etc. Overall, we wanted to show that it's valuable to think about this question, and to evidence this thinking. So this book is a collection of the considered views of people who have some kind of experience of the justice system to inform public opinion and public policy about what should happen to those people in the future. We are so grateful to everyone who gave us their time and thoughts and those who helped to spread the word and support people with lived experience to have their voices heard.

Another benefit of our network and reach collectively is that we were able to collect a variety of formats in the answers and hear from a range of voices. The volume is a collection of poems, essays and even a play – as well as some of the stunning pieces from the Koestler Arts 2019 exhibitions Another Me and A Feeling We All Share. It even ends with Prison Reading Group’s guide to exploring the issues.

This is only the start

In many ways, as I said at the launch event – the book and its question is more current and contemporary at its publication then it was at its inception. In that intervening year, this question has been asked by the Prime Minister and the Ministry of Justice and it's likely their answers will be included in the Manifesto which they’ll put to the electorate now on 12th December.

I also said that the book is not the end of the process, it's only the start. We want people to take the book, and the podcast launching next week, and engage with the question. We invite you to consider the answers here and come up with your own. What do you think should happen to people who commit criminal offences?

The Monument Fellowship is made up of eight organisations funded by The Monument Trust to work together to make a sustained, cumulative and transformative change to the journey of individuals through our justice system. The members of the fellowship are: The Centre for Justice Innovation, Clinks, the Diagrama Foundation UK, Khulisa UK, Koestler Arts, Lemos and Crane: The Good Prison, The National Criminal Justice Arts Alliance and Restorative Solutions CIC.
Posted by Clinks and National Criminal Justice Arts Alliance at 06:50 67 comments: